Cornwall, Ontario – On October 17, 2018, members of the Cornwall Regional Task Force (CRTF) conducting a border integrity operation along the St Lawrence River near Cornwall, observed an exchange of a duffle bag between occupants of a vessel and an occupant of a black SUV. Officers tried to stop the driver of the black SUV as he was leaving, but the driver failed to stop and fled the area. The SUV was found a short time later and the driver, who was identified as Jeffrey Cameron of Cornwall, Ontario was arrested for dangerous driving and flight from police. Officers searched the SUV, and as a result, Cameron was found to be in possession of 16 bricks of cocaine weighing just over 18 kilograms.

Jeffrey Cameron (47 years old) is charged is with:

Possession for the purposes of trafficking, contrary to the Controlled Drugs and Substances Act

Dangerous operation of a motor vehicle, contrary to the Criminal Code of Canada (CCC)

Flight from police, contrary to the CCC

Mr. Cameron’s next court appearance is scheduled for December 5th, 2018 at the Alexandria Provincial Court house. 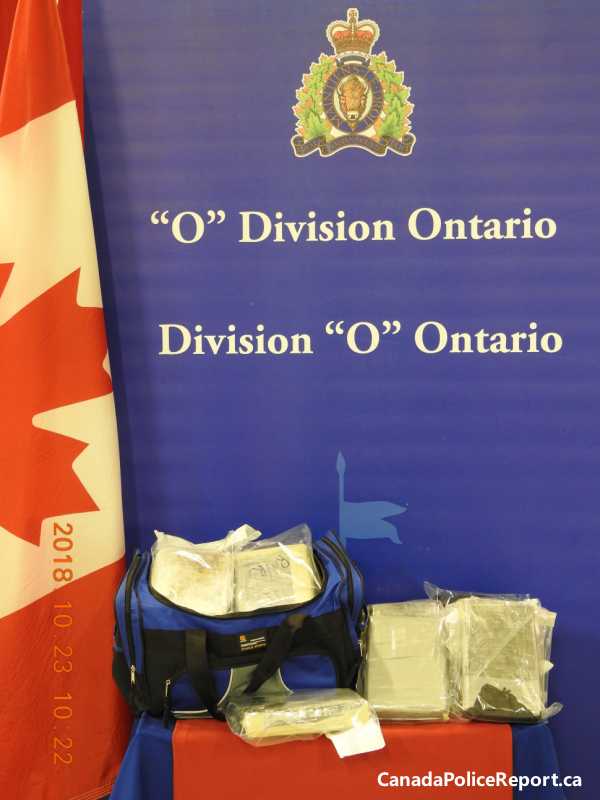 CRTF is a joint forces partnership that includes the Royal Canadian Mounted Police, Ontario Provincial Police (OPP), Canada Border Services Agency, and the Ontario Ministry of Finance. CRTF would like to extend our thanks to the Akwesasne Mohawk Police Service; the Cornwall Community Police Service; and the Stormont Dundas and Glengarry OPP and K-9 Units for their ongoing assistance.

January 27, 2020
Lloydminster, Alberta – This morning at approximately 1:00 a.m., Lloydminster RCMP located an injured male laying on the road on 44 Street in Lloydminster with serious life threatening injuries. The adult male victim was transported [...]

January 27, 2020
Rocky View County, Alberta – Airdrie rural RCMP is requesting public assistance in identifying two male suspects who are responsible for a break and enter which occurred at a residence west of Airdrie. On January [...]

January 27, 2020
Bridgetown, Nova Scotia – On January 23, Annapolis District RCMP responded to a call indicating a female was being threatened by someone she met online. The suspect threatened to distribute fake photos of her online [...]

January 27, 2020
Thompson, Manitoba – On January 24th, 2020, at approximately 6:15 AM, Thompson RCMP received multiple reports of a residence on fire on Centennial Drive East. The reports indicated that people may be trapped inside. Officers, [...]

Beiseker RCMP respond to a complaint of a firearms related injury