Red Deer, Alberta – An investigation by the Red Deer RCMP led to the arrest of one man and the seizure of drugs, cash and weapons.

Between April and July, 2019, police conducted an investigation into a drug operation in the Red Deer area. On July 22, search warrants were executed at two Red Deer residences and one vehicle.

As a result of the search warrants, police seized: 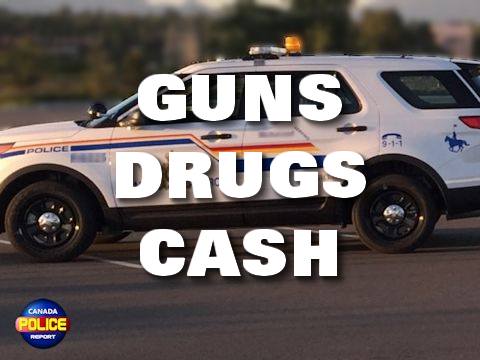 As a result of the investigation, Blaise Domstad (33) of Red Deer was charged with two Controlled Drugs and Substances Act offences and six Criminal Code offences, including:

• Possession of a controlled substance for the purpose of trafficking (x2)

• Possession of a firearm with a tampered serial number

• Possession of a restricted/prohibited firearm with ammunition without licence/registration

• Possession of weapon for dangerous purpose

Domstad was released on bail and will appear in provincial court in Red Deer on August 15, 2019.

Alberta
February 20, 2020
Edmonton, Alberta – The Edmonton Police Service is investigating the suspicious death of a male that occurred in west Edmonton late Tuesday evening. Shortly before 11 p.m., on Tuesday, Feb. 18, 2020, a West Division [...]

Airdrie
February 18, 2020
Airdrie, Alberta – On Feb. 17, 2020, Airdrie RCMP located a deceased male in a rural area southeast of Airdrie. An autopsy is expected to be completed this week but police believe that the male [...]