Edmonton, Alberta – The Edmonton Police Service is releasing surveillance images of two suspects wanted in connection with an Aug. 30 carjacking in northwest Edmonton.

A female exited the sedan and approached her on foot, before requesting that she call a cab for her.

As the complainant was helping the female, a male exited the same vehicle, approached her and demanded the keys to her vehicle.

It was reported that the male then forcibly stole the complainant’s black 2009 Hyundai Accent and fled the area. The complainant’s vehicle was later located in Valleyview, Alberta, by the RCMP. Police are looking for assistance in identifying these two suspects. 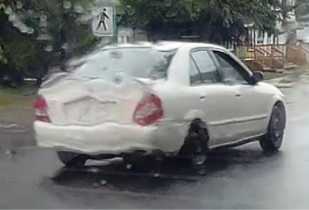 Police encourage anyone with information regarding the identity and/or whereabouts of these two suspects or the white sedan suspect vehicle to contact the EPS at 780-423-4567 or #377 from a mobile phone. Anonymous information can also be submitted to Crime Stoppers at 1-800-222-8477 or online at www.p3tips.com/250.

Across Canada
June 5, 2020
Saskatoon, Saskatchewan – Four men are in custody today facing drug trafficking and firearms charges, following an investigation by the SPS Drug Unit. On June 4, 2020, at approximately 2:10 p.m., a traffic stop was [...]