Calgary, Alberta – Homicide investigators continue to search for a man believed to be connected to a stabbing that led to a man’s death last weekend and are releasing additional CCTV images.

In addition to the images released on Monday, July 5, 2021, detectives have located additional CCTV that provides a clearer image of the suspect. Anyone with information about his identity or whereabouts is asked to contact police or Crime Stoppers. 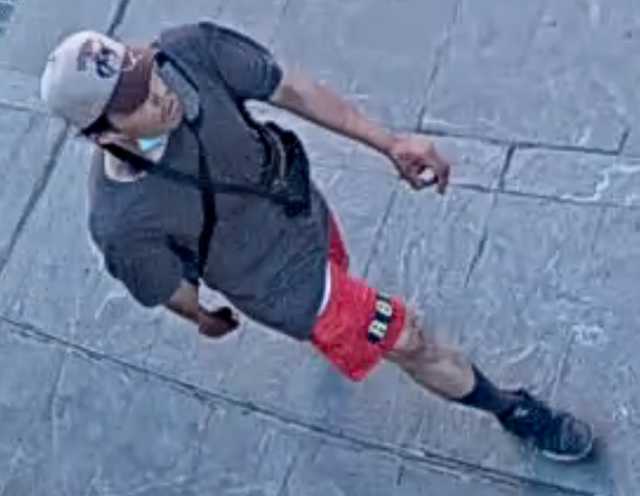 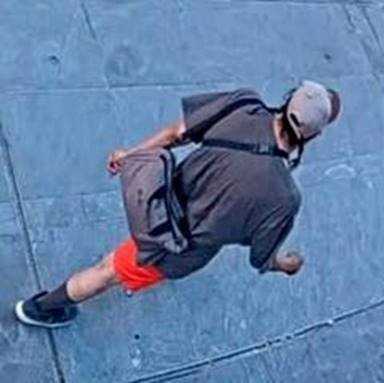 We also continue to seek drivers who were travelling eastbound on 5 Avenue S.W., around 7:14 p.m., on Wednesday, June 30, 2021, approaching Centre Street.

An autopsy has been completed and the victim has been identified as 62-year-old Paul MARCH. Our sincere condolences go out to the family and friends of Mr. March.

Calgary, Alberta – As we continue to investigate the concerning death of a man who was stabbed last week, detectives are releasing CCTV images in hopes of generating information from the public about a suspect as well as a vehicle and driver who are believed to have witnessed the attack.

The suspect is described as Indigenous, between 20 and 25 years old, 5’10” to 6’ tall, with a slim to medium build, with long, dark hair in braids. He was wearing a grey t-shirt, red shorts, a baseball hat and tall dark socks with black and white Nike running shoes. He carried two dark-coloured bags, criss-crossed over his shoulders.

In addition to the suspect, police are also searching for the driver of a vehicle, believed to be a potential witness to the altercation between the victim and the assailant. A red or burgundy SUV was stopped in the eastbound curb lane of Fifth Avenue at the intersection with Centre Street S.W., at 7:14 p.m., on Wednesday, June 30, 2021. We have information that the victim tripped and fell onto the back end of the SUV during the altercation with the suspect and we need to speak with the driver.

Investigators are also working to corroborate the victim’s account of a fight between a man and a woman in James Short Park shortly prior to the stabbing. Anyone who was in the park shortly before 7 p.m., on Wednesday, June 30, 2021, is asked to contact police.

“This is one of those cases in which information from the public will be crucial to helping us find answers to what occurred last Wednesday. Our team is working hard to get to the bottom of what happened, and to find the person responsible for this attack,” says Homicide Unit Staff Sgt. Martin Schiavetta.

The autopsy remains schedule for Tuesday, July 6, 2021. We expect to release the victim’s identity after the completion of the autopsy.

Man’s death now being investigated as a homicide

Our Homicide Unit is now investigating a fatal altercation from last week after the victim died.

Around 7 p.m., on Wednesday, June 30, 2021, the victim was walking past James Short Park, located at 115 4 Ave. S.W., when he heard an altercation between a woman and man inside the park. After hearing the woman tell the man to stop hitting her, the victim confronted the man.

It is believed the suspect then pulled out a knife and threatened the victim. When the victim turned to run, he tripped and fell onto the bumper of a car stopped in the eastbound curb lane of 5 Avenue by the Centre Street S.W. intersection. The vehicle drove away from the scene and we would like to speak with the driver as they are a witness.

The suspect then caught up to the victim and stabbed him. The victim was transported to hospital, but died on Saturday, July 3, 2021. An autopsy is scheduled for Tuesday, July 6, 2021. His identity cannot be released until it is confirmed by the Office of the Chief Medical Examiner.

Investigators are working hard to located CCTV in the area to identify the suspect. However, in the meantime, we are releasing images of the victim taken from the body-worn cameras of the responding officers in the hope that his clothing will be recognized by any potential witnesses who may have seen the altercation.

“People may have seen the altercation and not know that it resulted in such a serious and tragic outcome,” said Staff Sergeant Martin Schiavetta, with the Calgary Police Service Homicide Unit. “If you witnessed anything in the area that might be connected to this incident, have dash-cam footage, or any other information, please call us. Even the smallest piece of information can turn out to be the most important detail we need to figure out what happened.”

The victim’s face is obscured in the photos as he cannot be publicly identified until after the autopsy.

Anyone with information about this incident is asked to contact us by calling the non-emergency number at 403-266-1234. Tips can also be submitted anonymously to Crime Stoppers through any of the following methods: