Following a three-month investigation, ALERT has recovered 13 stolen holiday travel trailers, and other stolen vehicles and property, worth an estimated $970,000. The other stolen property included a sports car, recreational vehicles, motorbikes, tools, and various vehicle parts.

“This was a complex, coordinated scheme that undoubtedly ruined many family’s summer vacation plans. However, the impact of organized crime extends beyond the victim, and is a cost that society collectively bears,” said Supt. Dwayne Lakusta, ALERT CEO.

ALERT alleges two Medicine Hat men were involved in the thefts, and fraudulently re-vinned the trailers before being re-sold. A search of one of the suspect’s homes yielded materials for making fraudulent VIN stickers.

“Vehicle theft is a serious issue that affects us all through higher insurance premiums and can also be a risk to personal safety. Insurance Bureau of Canada is pleased to have been involved in this investigation and we congratulate ALERT for their success in recovering the stolen property,” said Sid Kingma, Director, Investigative Services, Western and Pacific Region, IBC.

Nathan Herter, 36-year-old man, was arrested in Medicine Hat on June 18, 2021 and charged with theft over $5,000, possession of break and enter tools, suspended driving, and possession of drugs for the purpose of trafficking.

The thefts date as far back as December 2020 and spread across the westernmost provinces. ALERT’s investigation relied on the assistance of Service Alberta, Insurance Bureau of Canada, Medicine Hat Police, and various RCMP detachments.

ALERT continues to investigate and is not ruling out additional charges. 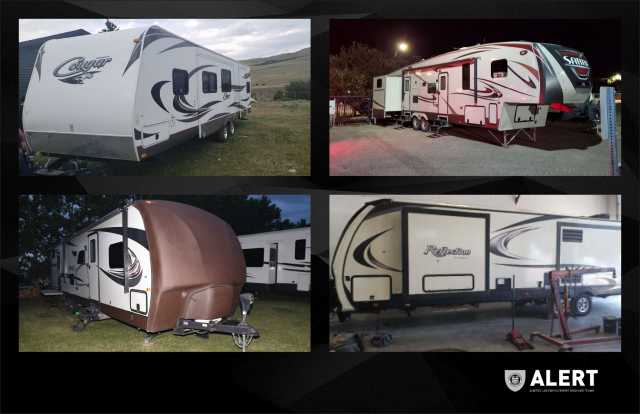 To date, ALERT has recovered:

Elevation trailer stolen in Redcliff and recovered in Sylvan Lake;

Keystone camper stolen in Dunmore and recovered in Lacombe County;

Reflection camper stolen in Lacombe and recovered in Hope, BC;

Cargo trailer stolen in Medicine Hat and recovered in Hope, BC;

Cargo trailer stolen in Redcliff and recovered in Hope, BC;

Keystone trailer stolen in Medicine Hat and recovered in Langdon;

Dutchman trailer stolen in Dunmore and recovered in Kelowna;

Keystone camper stolen in Strathmore and recovered in County of Forty Mile;

Sunvalley camper stolen in Lethbridge and recovered in Kelowna;

Cargo trailer stolen in Lacombe and recovered in Brock, Sask.;

Cargo trailer stolen in Drumheller and recovered in Brock, Sask;

Keystone camper stolen in Lacombe and recovered in Brock, Sask; and

A number of trailers were purchased at steep discounts, and already in the possession of a third-party.

ALERT believes there are still numerous stolen trailers outstanding and the investigation is ongoing. If you believe you may have unknowingly purchased a stolen trailer, you can contact ALERT’s Southeast Alberta Regional Property Crime unit at 403-529-8481.

Members of the public who suspect drug or gang activity in their community can call local police, or contact Crime Stoppers at 1-800-222-TIPS (8477). Crime Stoppers is always anonymous.

ALERT was established and is funded by the Alberta Government and is a compilation of the province’s most sophisticated law enforcement resources committed to tackling serious and organized crime.