Yellowknife, Northwest Territories – Norman Wells RCMP and the NT RCMP Internet Child Exploitation (ICE) unit have charged a man as a result of an investigation into reports of alleged sexual interference and related offences.

Mr. Grant Carey, 44 years old, from Newfoundland, has been charged with:

S. 153(b) Sexual exploitation of a young person 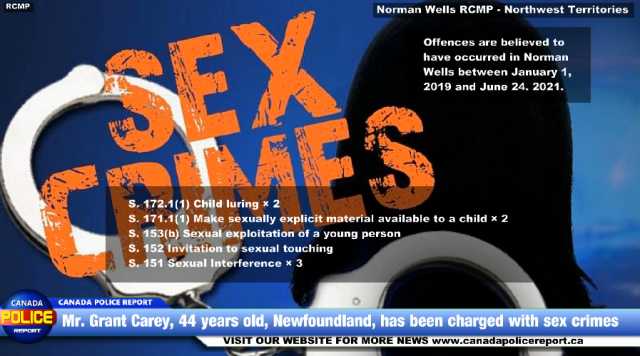 Mr. Carey appeared before a judge in Newfoundland and has been released on conditions. He will appear in Territorial Court in Norman Wells at a yet to be determined date.

The alleged offences are believed to have occurred in Norman Wells between January 1, 2019 and June 24. 2021. Mr. Carey may have had contact with other youth in the community. If anyone has information related to potential criminal offences involving Mr. Carey, they are asked to contact the Norman Wells RCMP at 580-1111, or your local detachment.

As Mr. Carey may have had employment in our neighbouring territory of Nunavut, and in Newfoundland and Labrador, we extend the request for anyone with information to bring it to your local RCMP detachment.

“Investigations into allegations of sexual offences that involve youth are a priority for the RCMP to investigate in an appropriate manner and with sensitivity to the young victims. We encourage anyone who believes they have information that involves potential further victims to please come forward” states Cpl Chris Whynot, Norman Wells RCMP Detachment Commander.