Chief Shahin Mehdizadeh congratulated the newest members of the K9 Unit, and the retiring PSD. He noted all police work is challenging, but pointed out the work doesn’t end for those in the K9 Unit at the conclusion of their shift. Theirs is a “24/7 operation” when training and care of the animal is factored in.

Following the presentations, Zap and Aron provided a demonstration of some of the skills they learned during a 20-week training program with their handlers. Areas covered in training include tracking; evidence search; building and compound search; obedience; agility; and criminal apprehension. After initial certification, the teams are required to re-certify annually. PSD Zap and Aron, both of which have already assisted in multiple apprehensions, will be trained in the spring for narcotic detection. 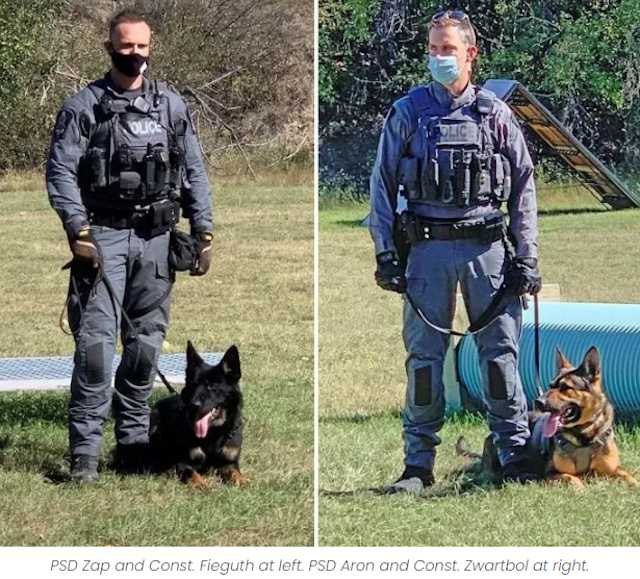 Their addition brings the K9 Unit to its full complement of four teams. They join PSD Myke and PSD Robby, both of which are Belgian Malinois.

Police Service Dogs typically work between seven and eight years before retirement. Const. DeMone and retired PSD Arco began training in September 2011 and retired in January 2021. They are the longest serving canine team at LPS to date. Arco was born Jan. 19, 2009 and is a Belgian Malinois originally from the Netherlands. Arco was deployed 641 times and assisted with 297 arrests.