It was reported to police that on Monday, August 23, 2021, at approximately 5:45 p.m., two unknown males entered a pharmacy in the area of 23 Street and 23 Avenue, approached staff and demanded narcotics. The suspects then departed with the drugs and fled the area on foot, heading northbound on 23 Street. No staff were injured during the incident.

Detectives with the EPS Robbery Section continue to investigate and are hopeful that someone may recognize the suspects and contact police. 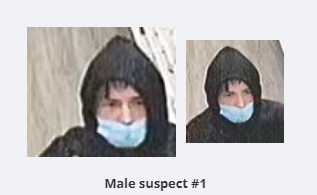 Suspect one is described as a white male in his 20s, approximately 5’8 to 5’10” tall. He was reportedly wearing a blue face mask, a black Air Jordan hoodie, dark blue/black jeans, white flat soled sneakers and was carrying a black Adidas backpack. He was described as having a distinctive nose.

Suspect two is described as a Black male in his 20s. He was reportedly wearing a black face mask, a black Roots hoodie with white draw strings, black jogging pants that were tight at the ankle and black sneakers.