Calgary, Alberta – We are asking for the public’s help to identify a man believed to be connected to an assault in downtown Calgary.

At approximately 11 a.m., on Saturday, Dec. 4, 2021, we were called to the City Hall LRT platform along Seventh Avenue S.W., for reports of an assault. It is believed that events leading up to the assault took place on a Calgary Transit CTrain that was approaching the City Hall LRT station.

It was reported that a man and woman traveling together had a brief interaction with a man unknown to them on the CTrain. A verbal argument occurred between the parties and the man and woman traveling together exited the CTrain onto the City Hall LRT platform. Once on the platform, it is believed the unknown man physically assaulted the male victim and then proceeded to assault the female victim.

Investigators have gathered CCTV images of the suspect and are asking for the public’s assistance to identify him and are also asking any witnesses to contact police.

The male suspect is described as being between the ages of 20 to 25 years old, approximately 5’6” tall, with black hair and a black beard. At the time of the offence, the suspect was wearing a black jacket, grey scarf, glasses, and a black backpack. 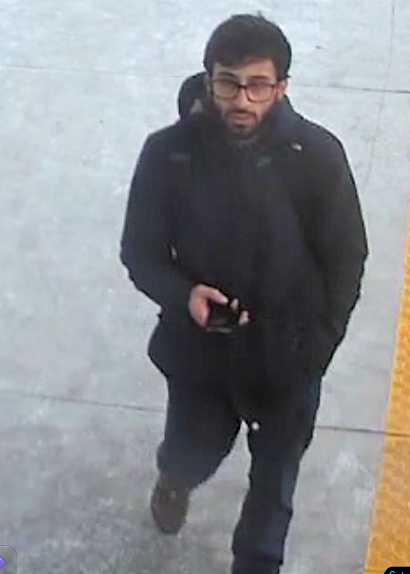 Anyone with information about this incident or the suspect’s identity is asked to contact us by calling the non-emergency number at 403-266-1234. Tips can also be submitted anonymously to Crime Stoppers through any of the following methods: