Winnipeg, Manitoba – As previously released: On May 25, 2021, at 6:00 a.m., North District officers responded to the 800 block of Magnus Avenue for the report of a seriously injured male.

Upon arrival, police administered emergency first-aid to an adult male victim who was subsequently transported to hospital by ambulance in critical condition. The victim later succumbed to his injuries, and his death is confirmed to be a homicide.

The victim in this homicide has been identified as Stuart Bruce Fritzley, a 35-year-old male of Winnipeg.

On December 20, 2021, Homicide Unit investigators travelled to the Calgary Remand Centre to arrest a male suspect (in custody for unrelated offences).

On December 21, the suspect was returned to Winnipeg. It is believed that the he was known to the victim as an acquaintance and that they had been together in the 800 block of Manitoba Avenue when the victim was stabbed.

Thomas Alexander Anderson, a 27-year-old male of Winnipeg, has been charged with:

The Homicide Unit continues to ask the public for their assistance locating and identifying a female who may have important information regarding the homicide.

The female is described as Indigenous in appearance, in her early to mid-20s and wearing a black jacket with dark jeans. She is believed to have been in the vicinity of the murder (Manitoba Avenue between Sinclair Street and Arlington Street) around the time it occurred.

Investigators are re-releasing surveillance images of the female to help with identifying her. 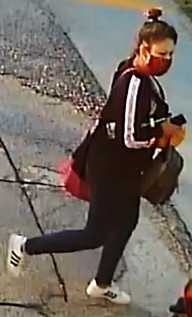