At 2:00 a.m. on May 10, 2022, frontline officers conducted a traffic stop on a Chrysler 300 that was driving erratically on Baron Road. Upon speaking with driver and passenger and conducting further investigation, officers located over 210 grams of suspected Methamphetamine, 24 grams of suspects cocaine and 11 grams of suspected fentanyl. 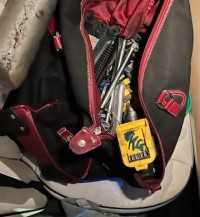 The driver, a 42-year-old woman and passenger, a 41-year-old man were subsequently arrested for possession for the purpose of trafficking.

“In addition to the drugs located in the car, officers also seized a loaded handgun as well as a replica handgun, an undisclosed amount of cash, tools and a catalytic converter,” states Cpl. Tammy Lobb, Media Relations Officer for the Kelowna RCMP. “The investigation has determined the loaded firearm was stolen from a residence in Kelowna in 2021. This is an example of how our officers are keeping our community safe by taking drugs and guns off the streets while combatting property crime.”

Officers are attempting to identify where the tools and catalytic converter were stolen from. If these tools belong to you, please call the Kelowna RCMP at 250-762-3300 and quote file 2022-27426.