Edmonton, Alberta – The Edmonton Police Service is seeking the public’s assistance to identify a pair of suspects in connection to a 2021 house arson in central Edmonton, which threatened the lives of two residents and cost the lives of the family’s two pets.

On June 17, 2021 at approximately 7:10 a.m., EPS members responded to a suspicious fire call at a residence near 120 Avenue and 91 Street. It was reported to police that the homeowners were able to escape the house without serious injuries, however, their two cats perished in the blaze. 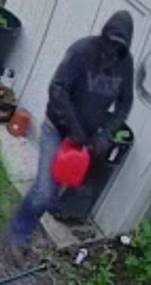 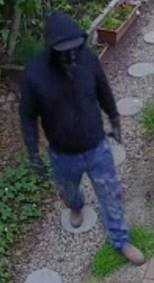 Police have continued to investigate, and the fire has since been confirmed to be an arson. Investigators are now releasing still and video images of two suspects – one holding a Jerry can – standing in the backyard of the residence. The security camera video also captured images of two unknown suspects entering the residence’s backyard through the back gate from the east alley.

The damage caused by the arson rendered the home uninhabitable.

Police are asking anyone who may have information about these two suspects seen in the images below to contact the Edmonton Police Service at 780-423-4567 or #377 from a mobile phone. Anonymous information can also be submitted to Crime Stoppers at 1-800-222-8477 or online at www.p3tips.com/250.