Nanaimo, BC – In two unrelated events, officers seized a sawed off rifle and in the other, a sawed off shotgun. Both firearms were also loaded. These incidents occurred on Tuesday June 14, 2022.

Just after 8 AM, Nanaimo RCMP Bike Patrol officers came upon several persons sitting on the steps that lead to the Nanaimo Military Museum on Cameron Street. One officer saw that one of group had in his possession a fairly unique jeweler’s hammer. This lead to a fulsome discussion on how it was that the individual would have acquired such an item. The conversation didn’t go well as moments later, officers found a loaded sawed off shotgun concealed in his waistband.

The individual was promptly arrested and the firearm was seized. A search of his effects located 16 additional rounds of ammunition. The firearm, shown in the attached photo, was a a modified single-shot 22 calibre rifle. 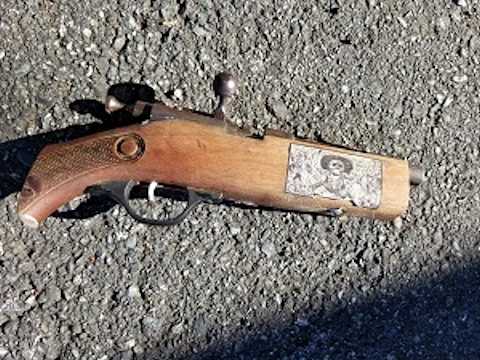 47-year-old Robert McGeorge of no fixed address was transported to the Nanaimo RCMP detachment and lodged in cells. Later that same day multiple charges were laid against McGeorge for weapons, drugs possession, possess break in tools and breach charges. McGeorge has been remanded until June 21, 2022.

In the next incident that occurred around 3 PM, front officers responded to a report of a man who appeared to be passed out behind the wheel of a motor vehicle parked on Rosamound St. When officers woke the individual they suspected he was impaired by drugs. After detaining him. a check of his clothing located a black bag that held various amounts of suspected crack cocaine, powdered cocaine, MDMA and fentanyl. A backpack located on the floor of the vehicle and within arm’s reach of the individual, was opened and inside it was found a loaded sawed off shotgun. (photo attached) 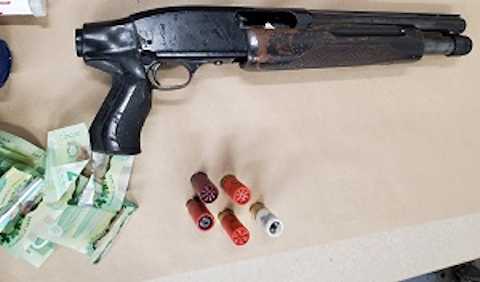 The 48 year old man and resident of Nanaimo was held in police custody overnight. On Wednesday June 15th, he was released from custody on an Undertaking for weapons charges, with a court date pending for late July 2022. His name cannot be released as charges have not been formally laid.

These two interactions speak volumes to the inherent dangers police officers face on a daily basis. Disturbingly, officers are finding more and more criminals who have taken to arming themselves with these dangerous modified weapons, said Constable Gary O’Brien of the Nanaimo RCMP.