Burnaby, BC – RCMP in British Columbia and Manitoba are looking for 24-year old Denis Ivziku who is wanted on drug-related charges stemming from an international drug and firearms trafficking investigation dubbed Project Divergent.

Denis Ivziku is wanted on Drug Trafficking, Conspiracy to Traffic and Possession of Property obtained by Crime charges from alleged offences that occurred between 2018 and 2022.

The Project Divergent investigation targeted drug trafficking and importation networks involving individuals in Canada and across the world.

“Twenty of the 22 individuals charged in relation to Project Divergent were arrested on February 23, 2022,” said Corporal Alexa Hodgins of the Burnaby RCMP. “Since then, another individual has been arrested — leaving Denis Ivziku as the only outstanding individual evading police in relation to this investigation.”

Denis Ivziku is described as:

“Denis Ivziku has connections to the Lower Mainland, including Burnaby, and it’s possible that he may be residing in the area while actively evading arrest,” said Constable Colin Lindquist of the RCMP Federal Serious and Organized Crime Unit in Winnipeg, Manitoba. “We would like the public to take a look at Ivziku’ photos, and to contact police if they have information.”

While Project Divergent uncovered ties to the Hells Angels, Denis Ivziku does not have known ties to the Lower Mainland gang conflict.

Anyone with information on Denis Ivziku or his whereabouts is asked to contact the RCMP Federal Serious and Organized Crime Unit in Manitoba at 431-338-0956. If you wish to remain anonymous, call Crime Stoppers at 1-800-222-8477 or online at solvecrime.ca.

Winnipeg, Manitoba – In 2018, a Manitoba RCMP criminal analyst noticed some trends regarding the international importation of drugs into Canada. When investigators realized they were onto a large-scale domestic operation, Project Divergent was born.

Through intelligence-led policing, the police uncovered a significant Canada-wide operation involving the trafficking of illicit drugs and firearms. The objective of the RCMP was to infiltrate the target groups and dismantle the drug trafficking and importation networks that involved individuals across Canada and internationally.

Multiple police techniques were used to infiltrate the networks, and investigators began to see large-volume transactions happening with cocaine; methamphetamine; opiates, specifically fentanyl; and assault-style firearms and ammunition. A connection with the Hells Angels was discovered.

On February 23, 2022, Damion Ryan, a full patch Hells Angels member with the Attica chapter in Greece, was arrested in Ontario, which was a huge disruption to the supply chain of drugs and guns that he helped facilitate.

In total 22 individuals were charged as part of Project Divergent. Officers arrested:

Kelvin Lee Nelson, 27, from Burnaby, BC

Mazin Nzar Zandy, 24, from Burnaby, BC

Two individuals are still at large and are wanted by police:

Kieffer Michael Kramar, 30. He is from Winnipeg, but police believe he could be anywhere in Canada.

Denis Ivziku, 24, from the Lower Mainland of British Columbia. It is believed he is still in that area.

Both these individuals are actively evading arrest. If anyone has information, please call the RCMP at 204-983-5420.

“As we have seen in this province and in this country, deaths due to opioid overdose have been staggering,” said Inspector Grant Stephen, Officer in Charge of the Federal, Serious, and Organized Crime Section. “Project Divergent disrupted the supply chain and took these drugs off the street. The utter disregard for human life shown by those involved in these networks, specifically those at the top of the chain, became very clear during this investigation, and we were able to take them out of the equation.”

“This operation began right here in Manitoba and reached from Vancouver to Toronto, to Colombia, Greece, and the United States,” said Assistant Commissioner Jane MacLatchy, Commanding Officer of the Manitoba RCMP. “The scope and success of Project Divergent was possible because of the tenacity of our investigators and the incredible and unfailing support of our partners. We could not have done this without them.”

The partners who assisted the Manitoba RCMP in Project Divergent are: 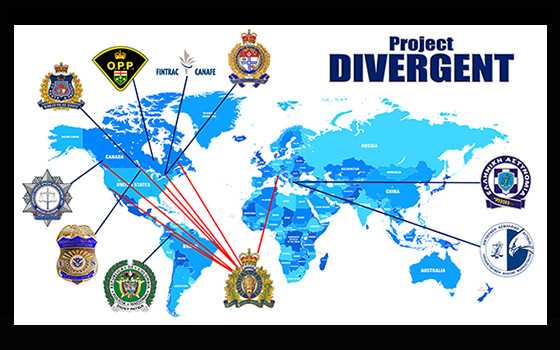