Kelowna, BC – On July 29, 2022, West Kelowna RCMP and EHS responded to the Green Bay Bible Camp after a report that a boat had struck the dock at a high rate of speed and ejecting one female occupant into the water.

Upon arrival, officers learned that an off duty lifeguard from the Green Bay Bible Camp, Aiden Godwin took control of the chaotic scene and immediately swam towards the unconscious female through debris and leaking fuel.

The female was found floating unconscious in the water. Aiden, with sheer determination and relying on his training brought the female to shore while supporting her head and neck. 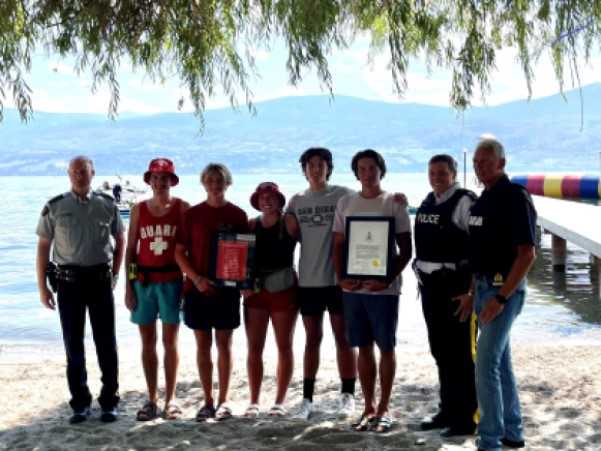 Once on shore, with the assistance of other Good Samaritan’s, including an EMT in training, the female was positioned onto a spine board. Aiden continued to assisted in providing additional life saving first aide until EHS and police arrived. The female was then transported to hospital for further medical treatment.

On August 11, 2022, the Kelowna RCMP Regional Detachment Officer in Charge, Superintendent Kara Triance, attended a small lake side ceremony to present Aiden with a plaque to celebrate his actions which no doubt contributed to saving the female’s life.

“Our community is fortunate to have people like Aiden who rise above the crowds with their courage and valor. On behalf of the Kelowna Regional Royal Canadian Mounted Police and your community, we thank you Aiden,” said Superintendent Kara Triance.

The commendation was presented directly to the head life guard Aiden Godwin. Five other life guards and the EMT in training (who is on staff at the camp), were also recognized for their actions with assisting once the injured party was brought to shore.