Edmonton, Alberta –  Sep. 22, 2022 Update: As intoxication was considered a factor in the weapons complaint and there was no willing complainant, officers chose not to charge the woman. Instead, her outstanding warrants were processed, she was provided a meal, and when officers felt she no longer presented a danger to others, she was released. 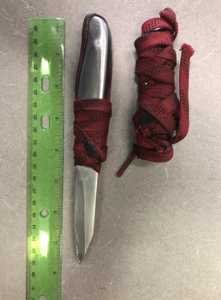 Edmonton, Alberta – The EPS has been provided with two videos of an arrest made on Sept. 15. The videos depict several seconds of an interaction where police responded to a weapons complaint in the area of 100 Street and 106 Avenue at approximately 4:09 p.m. on Sept. 15. The officer was driving in the area, and was flagged down by a member of the community who reported that two females, one of whom was armed with a knife, were about to fight. The officer immediately responded to the fight and observed the woman brandishing a knife. The officer directed the woman to drop the knife, but she refused, expressing her affiliation to a criminal gang, and walked away in an area where bystanders were present. 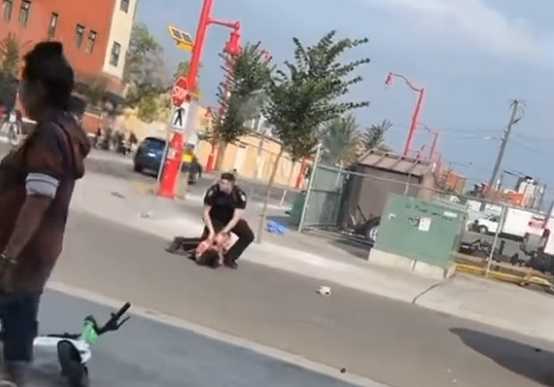 The officer considered his use of force options, given the suspect was armed, and determined pushing her to the ground would require the least amount of force possible to allow him to safely arrest the suspect. That is what is seen in the video. The knife in question was seized by police. The suspect was not injured. The suspect was arrested for possession of a weapon dangerous to the public. The EPS has obtained CCTV from the area that captured the event and confirms the above report of the incident.

Upon review of the incident, there are currently no grounds for an investigation by the EPS Professional Standards Branch.