Vancouver, BC – Vancouver Police have updated its list of most wanted suspects from September’s Breakout Festival riot at the PNE, releasing photos of 15 additional suspects who allegedly destroyed property and put other concert-goers in danger.

“With tips from the public, we’ve already identified several people who participated in dangerous and destructive behavior during the Breakout Festival riot,” says Constable Tania Visintin. “Now, we’re again asking everyone to look hard at these newly released pictures to help us hold these additional suspects accountable.”

Vancouver Police immediately launched a criminal investigation after the last-minute cancellation of a headline act at the Breakout Festival sparked fights, assaults, and widespread property damage around the PNE Amphitheatre and in the surrounding neighbourhoods on September 18. Led by VPD’s Major Crime Section, investigators have spent weeks reviewing dozens of videos posted online and submitted tips. 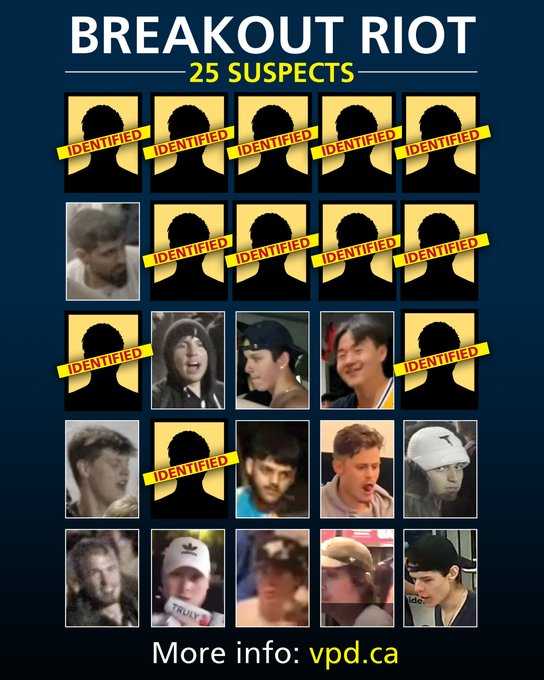 “On November 1, we released pictures of our 10 most wanted, and in just over three weeks we’ve positively identified almost all of those suspects,” adds Constable Visintin, adding that some of the suspects turned themselves in after seeing their pictures online.

Added Laura Ballance, spokesperson for the PNE: “The PNE is very appreciative of the attention and focus the Vancouver Police Department has brought to this investigation. We continue to provide any assistance we can to aid VPD in their investigation, and encourage anyone with information on this latest group of suspects to come forward.”

Pictures of the 15 newly-released riot suspects are posted online at VPD.ca, along with an online submission form to make it easy for anyone who knows the suspects to inform investigators.